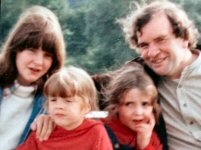 My own experience of Stammering Treatment Procedures

In 1989, aged 56, I went to Andrew Bell to have my stammer cured, a one-week intensive residential course, in Kirkcaldy.

At the end of the week I was fluent; I had 'got my speech' as Bell put it. Not just within the group, but everywhere and in all situations, and for some weeks. For this experience I, and many others, feel enormous gratitude to Bell, and admiration for his achievement. I talked many years later (at a BSA meeting) to a silly woman, a speech therapist at the Michael Palin Centre, who despised Bell and his treatment. She said "Of course I could make anyone fluent in a week, but it would be pointless".

But that does not mean it was a bad thing.
The apparent dishonesty of Bell's claim has darkened his reputation. For it is the case that very few, if any, of his clients are in fact cured. This has caused him some trouble I know - when I went, you only paid your fee at the end, if you were happy. Now you pay on the first day. But I say apparent because it may be an integral part of the Bell procedure that clients believe in the possibility of cure.

Bell's website mentions the BBC programme QED, broadcast in 1985. It was seeing this program that (albeit four years later) made me attend. The mere act of watching the programme actually had an immediate effect on my speech. Speech, after all, is not difficult in itself for the stammerer; he can speak perfectly when alone, or (in some cases) to an attentive audience. When the stammerer is 'cured' he realises that the mechanical act of speaking is in all circumstances just as easy as it is in favourable circumstances.

Ten years after my Bell attendance, I attended one of Anne Blight's Starfish courses. Anne was at one time a big beast in the McGuire programme, and retains that focus on 'costal breathing'. Hardly had the course started when I was completely fluent. The key trick was: "Wait, take a costal breath, start speaking as soon as the breath is in".

Again, after the course I remained fluent, but not for long.

There are many other procedures and devices available. If you google for anything with 'stammer' in it, then quite a few little adverts appear on the right, including McGuire, but not Bell or Blight. One such advertises a 'device', probably like the 'Edinburgh Masker', in America. They didn't mention the cost, but after a few emails, grudgingly revealed it was $4,000. Yes, four grand. There's a lot of money in stammering, like gas meters, because about one percent of all people stammer, and they all desperately want to be cured.

You can do the sums for the Starfish course for example; Anne is fully booked all the time, does about 12 courses a year, each with about 20 people paying Ł250. That's Ł60,000 a year, which is not an amazing income, less than I used to make as a contract programmer. Bell's numbers are about the same, but he charges Ł450 a go, so makes about Ł108,000, again not astronomic. McGuire is maybe a bit more shady - see what David Rose has to say. The punter pays about Ł1,000, and there are 50 or 60 on each course. McGuire is better in one way, in that Bell and Blight do not face up at all to the fact that one person cannot truly service all his clients forever. McGuire ordains certain people to do courses, and one worrying thing is that the ordained will not reveal what they get paid. But the idea is right. If you've got a good procedure, you need to start a school. I'd say too that, given the paranoid tendencies of the stammerer, you should be completely open about all financial arrangements.

Blight does a bit of 'ordaining', in that some former clients are paid to come back and help. But, last time I looked, there was nobody of the calibre to run a course. And, like McGuire (though not, in Anne's case, at all sinister), neither the opportunities nor the rates of pay are revealed. It is a sad fact that one way of maintaining fluency is to demonstrate it in the presence of people who stammer. I experienced this myself, with Bell's "Fluent Speaker's Association". Bill Watson and Martin Bolderstone ran a successful "FSA" group in Cheltenham for some time, at which I fluently assisted.

But the truly cured stammerer, like a blind person restored, would just get on with his life, with no need of the afflicted. Instead, on achieving fluency, we are consumed with a zeal to help stammerers - and can maintain fluency by doing so.

Reflections on the Nature of Stammering

A feature of my own speech is that I can deliver a speech performance fluently and well, without stammering and without any fear of stammering. A ceremonial reading, a wedding speech, a speech at Toastmasters , a technical presentation, a classroom lesson, are all enjoyable opportunities to show off (Hear e.g. my reading of Housman). This was the case even before my Bell course, though that had the effect (among the other marvels) of reinforcing the feeling.

This 'Performance-Fluent' quality is not common to all stammerers, and in fact many normal speakers are worried by public performance. In my case, too, I'd say fluency depended on a thorough knowledge of the subject, and not having to tell any lies or defend any dodgy positions. On the other hand, the quality is not unknown: to Watson and Bolderstone above I'd add Mike Jones of the Manchester Bell Circle (not the NLP Mike Jones), and Geoff Arnold of Starfish & Toastmasters. Although Jones and Arnold both use 'tricks' to maintain fluency (which I don't), their platform manner, charisma, and fluency are first rate.