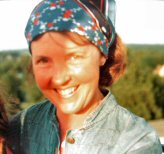 My studies started in 2003, with the short course A172, 'Start Writing Essays'. You always have an assigned 'tutor' on an OU course, and the 'Tutor Marked Assignment', or TMA, is a bit of work you have to do, send off, and get marked. A172 runs for three months, in my case November 03 to February 04, and costs Ł95; it is entirely electronic, that is you never see anybody and your TMAs are sent in using the 'Electronic TMA System'. There is a lot of contact though, with the tutor (Liz in my case) and with other students, who all participate in forums set up by Liz using the conferencing system known as 'First Class'. Liz made sure everyone could use email, and post to a conference, by setting little tasks from time to time.

There are two TMAs in A172: you choose an essay title from a short list, then the first TMA is your plan for that essay, the other, at the end of the course, is the essay itself. My submissions, with Liz's comments, are here and here . My marks for the two were 75% and 50%. TMA2 scored badly because actually there was a second part to it (worth 25%) which I forgot to do...So the essay itself scored 66%. Jolly good, John. Well done you! Actually, I'd only have been satisfied if a hand-illuminated copy of my essay on fine vellum had been chosen for presentation to the Chancellor.

Then I signed up for A220, a course on 17th century (or C17 as we academics say hem hem) French and English history. This has been going for three months, and I've just (April 04) sent in my first TMA to Sue, m'tutor for this course. The TMA is in two parts, here and here .

A220 is a longer (February to September) and more expensive (Ł235) course than A172, and is totally non-electronic. There are four group tutorials in Winchester, where eight of us turned up to meet Sue for the first time in March 04, and you send your TMAs in by post, with a multi-part form with sections for your details and for the tutor's comments.

We had another tutorial in late April; it seems to be Sue's plan to have a sort of 'coaching' session a couple of weeks before a TMA is due. I've just (13May04) sent off my second TMA. This is an essay, preceded by a plan for the essay; I haven't published the plan, thinking it a bit boring, but here is the essay.

July 17th 2004. I think I've dropped out of A220; TMA3 was due yesterday, and I hadn't done anything really towards it. I've never settled to a steady pattern of work, just turned up to the two tutorials, and did a bit of quick reading to prepare the assignments. I suppose if lightning struck I could resume, having just lost one eighth of the possible marks. I'll try & write to Sue & keep my options open. The marks are half for the exam and half for the TMAs.

[A220 is now (March 08) defunct. It was described by the OU as "A second level course which takes a comparative look at France and the nations of the British Isles in the 17th century. Included is a consideration of the distance between the images of monarchs and the realities of their governments".

Hmm, yes, well, here we are in January 2006, and I have continued - more or less - with the OU. I did indeed drop out of A220, didn't turn up for the exam. They (the OU) don't like that, they get a government subsidy, but only if the guy turns up for the exam.

January 6th 2006. Last year I plunged into geology, S260, with one of the legendary OU Summer Schools (SXR260) in August. This time I did complete the course, but only just, by the skin of my teeth, getting my 40 points (a degree is 300) with a bare pass in the course work and the exam. This year it's Latin (A297), and I detect the same obsessional enthusiasm which characterised the start of last year's geology.

November 2006. I stuck to the Latin quite well, scoring 98, 93, 94 and 88 for the TMAs. The exam went quite well too, I'm guessing 85. There was no OU Summer School, but there are always plenty of courses around, so I went to Durham for a residential week, and to Bert's old training college, St Mary's Twickenham, for a weekend, where Linda got us to sing: Tres mures, Tres mures /Ecce currunt, ecce currunt /Sequuntur agricolae feminam / Caudas ea desecuit cultro /Mirabile spectaculum uisu /Trium murium.

Also this month, the short course A174, Start Writing Fiction, started. I'm hoping it goes better than last year's short course, S196 , on Planets. This was so boring that I sent in a paper (so they got their money) saying 'don't know' to each question, and scored a sparkling zero. The assignments for A174 are bits of creative writing by the student, and here is my submission for the first TMA. Like my very first OU course, A172 above, A174 is entirely electronic and the marks come from the two TMAs, 30% from the first, and 70% from the second.
And now, here is my submission for the second TMA. This was submitted near the end of the course, 25Jan07; I got 80% for TMA01, XX% for TMA02, giving YY% overall.

The point of a short course is that it bridges the gap (November to February) in your OU studentship if you're doing another longer course next year. The point of keeping your studentship is that you otherwise lose access to all the academic library online stuff - JSTOR, Times Archive and, as they say, much much more. It used to be worth doing for the OED and DNB, but now you can get those using your ordinary free public library membership. It is idle to pretend that being an OU student is at all comparable to being at a proper university, but it does carry these important privileges. To be on the academic staff of the OU is, though, I imagine, very like being at a proper university, with the benefit of not being distracted by those pesky undergraduates.

And, I've signed up for the new Intermediate Latin course, A397, still quite obsessive, I've read the Aeneid translation through, and done a few other Latinate activities.

December 2006. The A297 results arrived, well done me, exam result 86, as predicted above.
December 2007. The A397 results arrived, not so good, exam result 73. T189 Digital Photography was a disaster. It doesn't even have a tutor, just a bunch of enthusiasts of various abilities. After a scruffy online 'tutorial' or two, and some glaring factual errors, I gave up. Let's hope the Greek hasn't gone the same way, in a drive by the administrators to cut costs. My costs were cut though, this year, thanks to Tesco: I wonder if their vouchers are legal tender at Oxford colleges? The following is a summary of my OU career to date, as set in my OU 'signature':

Warning: include(footer.php): failed to open stream: No such file or directory in /home/john8900/public_html/OpenUniversity.php on line 173

Warning: include(footer.php): failed to open stream: No such file or directory in /home/john8900/public_html/OpenUniversity.php on line 173

Warning: include(): Failed opening 'footer.php' for inclusion (include_path='.:/usr/lib/php:/usr/local/lib/php') in /home/john8900/public_html/OpenUniversity.php on line 173