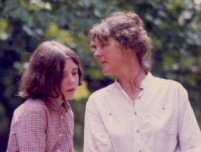 Year after weary year, every schoolboy learned these lines:

Not a drum was heard, not a funeral note,
As his corse to the rampart we hurried;
Not a soldier discharged his farewell shot
O'er the grave where our hero was buried.

We buried him darkly at dead of night,
The sods with our bayonets turning,
By the struggling moonbeam’s misty light,
And the lantern dimly burning.
...

I never knew much about him until Valerie lent me a biography of him by Carola Oman, daughter of Sir Charles Oman, author of a 7-volume account of the Peninsular War which attracted some complaints about his treatment of Moore (in Vol 1, 1902).

The poem above recalls Moore's death in battle after leading his 30,000 across the cold Spanish mountains in January. Sir Robert Ker Porter took his sketchbook with him on this campaign, and you can see it today in the British Museum. Miss Oman shows some of his drawings, the long line of soldiers and guns winding round the snowy mountains.

Maybe Sir Charles had belated Tory sympathies; for Moore was a Whig, brought on by the Duke of Hamilton. and had bluntly criticised the Portland administration. This government (which in 1808 included Castlereagh & Canning) thus tried unsuccessfully to avoid appointing him to the supreme command. And, after Moore's heroic death, there was a determined Tory campaign to vilify and blame him. This led his brother James to publish a full account, in 1809, of the campaign. This book shows that the disorganised and deceitful Spanish, with the connivance of government envoys hostile to Moore, were in fact to blame.

Lightly they'll talk of the spirit that's gone
And o'er his cold ashes upbraid him,--
But little he'll reck, if they let him sleep on
In the grave where a Briton has laid him.
...

For blame there was.
Our army had been sent to support the Spaniards, and (faced with 200,000 French and no Spanish support) had had to scuttle ignominiously back home, with substantial loss.

Moore took part, with Nelson (who here, on land, suffered the later-useful loss of an eye), in the Corsican campaign which caused that island to become British for a couple of years. The campaign opened with the taking by assault of St Florent, in whose bay the Victory (Hood's flagship) was deployed. 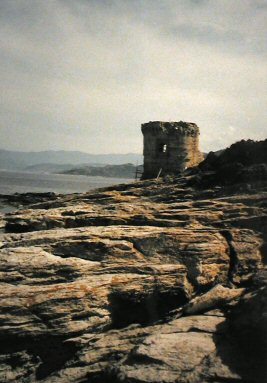 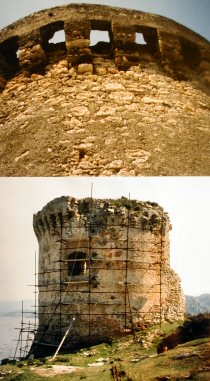 It turned out that a certain Tower in that bay, on Mortella Point, had first to be reduced, and Moore (then a Lieutenant-Colonel) led the assault party. He was impressed by the tower's design, sent home the year before, to which we owe the many Martello (Captain Wolseley's mis-spelling) towers still present on our coasts.

There is a link here with Moore's contemporary William Cobbett, who commented on the waste of money in the building of the towers, and on the scandalous way early knowledge of the decision to build had led to cornering of the brick supply.